As I already mentioned in the past, the occasional Early Modern Greek word ends up in LSJ, because it has been used in a scholion to explain an Ancient word, and LSJ figured they’ll take all the help they can get.

Such a word is λαγόγηρως. Literally, it’s “Old Man Hare”. Actually, literally, it’s “Hare Old Man”, but that just wouldn’t work in English. As recorded in LSJ, it’s used in the scholia to Lucian Dream 24 to gloss μυγαλῆ “field-mouse”. You won’t find it in the 1906 Rabe edition of the Scholia to Lucian, which the TLG has: it’s “ap Bast. Ep. Crit. p. 169”. This is an instance of Classicists’ infuriating habit of using abbreviations without explaining them anywhere (and I checked). After some googling, I worked out it means that the gloss is mentioned in Friedrich Bast’s 1805 Lettre critique de F.-J. Bast à M. J.-F. Boissonade, sur Antoninus Liberalis, Parthenius et Aristénète. (So Rabe’s edition does not contain every single piece of Byzantine commentary ever authored on Lucian? Grrr.)

The word λαγόγηρως is also used in Suda, the mixmatched 10th century encyclopaedia, to gloss μύξος—although that doesn’t help us much, because the only thing we know about a μύξος is that Suda says it’s a λαγόγηρως.

So it’s likely a Modern Greek word, and given the scholion to Lucian, it’s likely a field-mouse, or some other rodent of that ilk. Old Man Hare shows up in other dictionaries too, but it does not show up in the big contemporary dictionaries of Greek; so other lexicographers are on their own. Trapp shrugs and says it’s just “an animal”. (He does at least record the more modern-looking variant λαγόγερος.) Kriaras can afford to go further, particularly given where it has been compiled (I’ll explain in a sec): it reports that a λαγόγερος is “a kind of rat, a μυγαλῆ”, and the passage it cites in response is an Early Modern falconry manual, in which the Old Man Hares are seized by birds of prey.

So those aren’t Human Old Men being seized, and while they could be hares, there’s no reason to think the Lucian scholion is wrong: it’s some sort of rodent.

It’s also a μύξος, whatever on earth that is, and as I was perusing recent additions to Suda On Line, I noted the newly translated entry on μύξος, expressing some puzzlement about glossing an unknown word with another unknown word.

So without looking at Kriaras, I realised this word was at least Early Modern Greek, and quite likely Modern Modern Greek. I popped across to the online Triantafyllidis dictionary, and didn’t find Old Man Hare there: so it’s not a word that’s made it to the Contemporary Standard. But figuring that there are always surprises to be had on the Interwebs, I googled λαγόγερος just in case.

I found Old Man Hare in a Greek digital photography forum. Like me, the photographer was an urbanite who wouldn’t know a field-mouse from a dormouse (which was the Suda translator’s first surmise). I mean… I don’t know: *are* they the same thing? But the chap took the pic, recorded the place where and when the photo was taken—midday, near Edessa, in Greek Macedonia; and added what the locals call the beastie. Ladies and Gentlemen, courtesy of poster “Junior”, meet Old Man Hare: 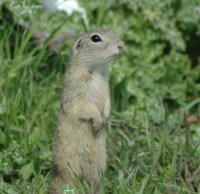 He exists, and he certainly looks like what Lucian’s scholiast had in mind—and what the falconry writer established was an appropriate afternoon snack for an eagle.

And of course, some Greek dialectologist somewhere has recorded the fact that in Edessa (and probably elsewhere) this beastie is called an Old Man Hare. Because the Modern Greek dialect dictionary is still stuck at delta, it’s not straightforward to find out who—although at least a draft of the remaining letters is now prepared. But Kriaras’ dictionary staff have a fair collection of dialect glossaries on site, so they would have had the wherewithal to figure it out. And even if they didn’t, Edessa is just a 94 km drive away from downtown Salonica. You’ll probably run into Old Man Hare before you get to the waterfalls. (That’s why the Other Language’s name for Edessa is Vodena, “waters”.)

Three other hits of note for Old Man Hare online. One was the Suda On Line entry, cached when it wasn’t yet translated. One was from another Greek forum, this time ecological, recording Old Man Hare as one of the animals you might be surprised to find in the vicinity of Thessalonica. The Byzantine pronunciation /laɣoɣiros/ seems to survive for our rodent friend, because one posting later, courtesy of poster Kostas Karpadakis, Old Man Hare shows up again, this time spelled as λαγόγυρος, “Hare Roundabout”:

I still can’t tell you whether it’s dormouse or field-mouse. Or hamsteroid. I showed the three links to Nikos Sarantakos (he whose Magnificent Blog I keep extolling), and he said that even before he got to the forum mention, he’d worked out this must have been a χαμστεροειδές. That kind of nonce macaronic coinage—American stem, archaic suffix—is pretty damned funny if you’re steeped in the angst of Greek language history.

*I* can’t tell you, but Karpadakis did not take the photo himself: he linked to zoology site in Novi Sad Uni, and the photo is labelled s-citellus02.jpg. A citellus is none of the above: as the site itself says, this is a Spermophilus citellus, which in English is the European ground squirrel, aka European Souslik.

And when I google his “historically wrong” spelling λαγόγυρος, I get not three or four hits, but 321. Confirming it as the Spermophilus citellus or Citellus citellus. Some more links: citellus #1, citellus #2, citellus #3. And a table of beastie names at Nature Names for Tourists: Local names for distinctive European mountain wildlife:

So the Bulgarians got their word for the beastie from the Greeks.

In fact, that /laluɡer/ in the Bulgarian may suggest the modern spelling λαγόγυρος, which in Byzantine Greek would have been /laˈɣoɣyros/, is more accurate, and the Old Man bit was a written correction… Nah, the /u/ is in the wrong spot. Some Bulgarian phonological process, I guess: the Greek Macedonian pronunciation would be /laˈɣoɣirus/, which doesn’t explain лалугер. So I’ll stick with the assumption for now that this was originally Old Man Hare reanalysed as Hare Roundabout, until I hear something to the contrary. And that the accepted modern spelling is λαγόγυρος, although that form isn’t in Triantafyllidis’ dictionary either.

The third link for λαγόγερος, Sarantakos dismissed as “an incredible concoction”, and I’m not disagreeing. The article was by an Italian classicist, and it was dealing with the Suda entry on μύξος as a whole, which goes into bizarre beliefs about donkey urine. The identity of Old Man Hare comes up just before the conclusion.

I’ve never studied Italian, but what with Esperanto, Latin, French, and a fair exposure to Classical Music in my youth, I can sort of read it. It’s helped working in a French & Italian department, and not being as embarrassed about speaking in Super Mario Bros. Italian as I am about speaking in Pepe Le Pew French. I could even make the minimal effort of dealing with the mojibake of the page, such as by, I dunno, switching my browser encoding to Latin-1.

But once I’d worked out the article’s claim, I had no motivation to proceed further. A dictionary I had not checked was Sophocles’, and the author accepted and elaborated on Sophocles’ surmise that an Old Man Hare was a kind of fish. Because λαγώς was also a word for sea-hare.

That is ungracious and horrid of me. I had the benefit of late Aughties Interwebs, this guy… well, this guy was writing in 2006, so he did as well. Hm. I had access to Modern Greek (even if it was in digital photography forums, detouring via Novi Sad Uni’s Zoology department), this guy likely didn’t. Still, the guy was not writing after the compilation of LSJ, and even if Suda is obscure about Old Man Hare, the scholiast to Lucian is not. Sophocles at least offered a definition for λαγόγηρως, but Sophocles *is* dated, and you can do better than that in general. The falconry manual may well have been inaccessible; but Suda has a whopping big “in our vernacular” in there, he could at least have asked some Greek contacts.

The blunder here is violating the Common Sense precept of etymology: If you’re looking for Latin etymologies, you start your search on the Tiber. I tracked down the origins of that saying in my personal blog just before—taking a break from obsessing about constructions of Franco-Canadian identity; and it sounds a hell of a lot better in the original German. I’m always a little miffed when Classicists get as far as Byzantine Greek, and don’t notice the live language spoken on the other side. (Witness LSJ’s definition of στοίχημα: it’s “wager”, not “deposit”, and they got “deposit” by a casual reading of Eustathius’ scholion.)

But now at least, we have photographic refutation. In Edessa, you search for etymologies on the river Voda.

A sentence I smirk at, I confess, given where you search for the etymology of the river Voda. Now unsurprisingly renamed Edesseos.